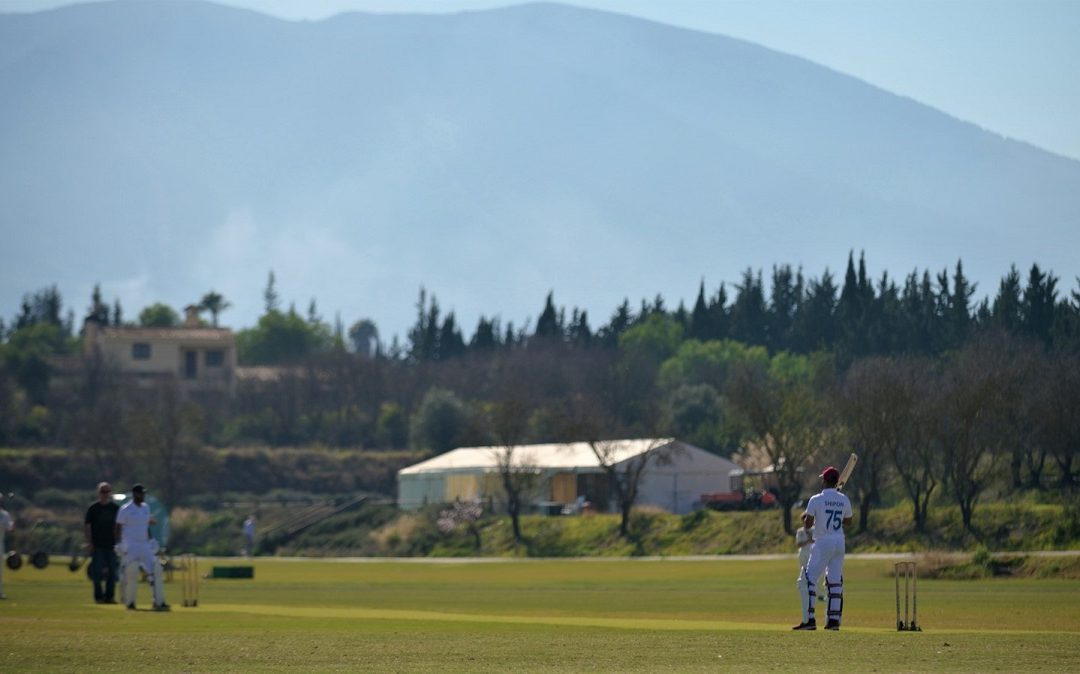 CDSCC out in numbers

A very encouraging turn-out at the Cartama Oval, home of Costa del Sol Cricket Club, saw two home teams being fielded to dispute a 35-over friendly match last Saturday. Juniors and seniors played alongside one another in what was an intriguing and close-fought encounter between the inevitably named Costa A and Costa B, who were captained by Jay Wild and Chris Batten respectively.

After a mandatory round of coffees for all in attendance, Costa A openers Jeremy Knott and Egan Dantis limbered up to face the bowling of Mark Garrett and skipper Chris Batten and, once the field was set and umpire Ian Higgins ready, the game got underway. Costa B’s accurate seam attack succeeded in pinning the batsmen back in the early exchanges, with a couple flying past the edges and the run rate kept down to less than a run a ball.

After a cautious start, Jeremy and Egan’s stroke play became more expansive and both players evidenced a willingness to strike cleanly through the line of the ball; in the process taking the former into the 20s and the latter into the 30s. However, such is often the case in this sport, both were removed in reasonably quick succession. Egan was caught leg before wicket by Max Purdy – a junior with huge promise as a bowler, I might add – while Jeremy looked to up the ante and lashed across the line at a straight ball from Max’s brother Ed, succeeding only to loop it up to the grateful hands of wicket keeper, Jeremy [S].

The two new batsmen at the crease, captain Jay Wild and Danish ringer Jesper Hansen, however, were not fazed by the prospect of carving out a new partnership from scratch. Both played the straight ball with consummate ease and, besides one or two difficult chances in the field, never looked like throwing away their wicket. A mixture of fine stroke play and good strike rotation meant they scored at a very similar rate and frustrated the Costa B bowlers, who would not take another wicket in the remainder of the 35-over shift in the field.

With Costa B largely looking to protect the boundary in the dying overs, Jay and Jesper were afforded greater freedom and manipulated the field well. Scoring two runs off the last ball of the innings ensured Jay got a well-deserved half-century, while his partner in crime Jesper walked off unbeaten on 49 and smiling from ear to ear. Not only had they put on a hundred runs together, but they had – critically – upped the required run rate for the subsequent chase by helping their team to a first innings total of 206-2.

Having been set a competitive, yet eminently chaseable target, where six runs per over would get them over the line, it was Costa B’s turn to show what they could do with the bat.

Jeremy [S] and Simon Livett looked confident at the top of the order and resolute in the face of some good bowling spells from Harry Scott, debutant James, Jeremy “the cat” Knott and youngster Niall Garrett. Having made a significant dent in Costa A’s score of over 80 runs for the first wicket, it was Jeremy who fell first as his namesake got revenge for his dismissal in the first innings by clean bowling the opener for 22.

The introduction of skipper Chris Batten at the crease also heralded a new plan of attack for the fielding side. On came Jesper Hansen to fizz down some nippy deliveries and break the new partnership. But Chris would not be dictated to. On his way to an entertaining and cleanly-struck 37 runs, he smoked a series of marginally-over-pitched deliveries back from whence they came (and then some!); in so doing put his team in a commanding position with 58 required with just under 10 overs to go.

Simon Livett top-scored with a neat innings of 45 runs, nerdling the ball around the park before (uncharacteristically) clubbing the ball to Egan Dantis at deep mid-wicket off the bowling of Jay Wild. In contrast, his replacement at the crease, Selim Hossain, looked to hit big from the outset and did indeed connect for two almighty maximums and one boundary in his bid to finish things off quickly.

It would be a case of living and dying by the sword, however, as he was caught brilliantly by James at long-off for 21. Try as they might, young Max and Ed Purdy – heroes with the ball earlier on in the day – were left with too big a task and couldn’t quite steer Costa B to victory. Despite their best efforts and being aided by a few extras in the final over, Costa B managed to score 205-6 by the end of an evenly-balanced day’s play; falling short as they did by one solitary run.

Another great day down at the Cartama Oval! In my view, a standout example of how to get youngsters involved in sport through inclusion and positive reinforcement. Each of the boys – Niall, Max and Ed – will have gained a lot from experiences like Saturday’s match and all have a bright future ahead of them.

That is not to say, however, that the game was without its competitive element and noteworthy performances. Although it was a friendly match on paper, everyone wanted to win and I think that was reflected in the patience and maturity of some of the innings. In particular, Jay Wild’s Man of the Match performance of 51* and three wickets turned the tide for his team and – regardless of winning or losing in such a close encounter – performances like that can only be good for CDSCC going forward.