Crusaders too strong for Vikings in all-CDSCC affair 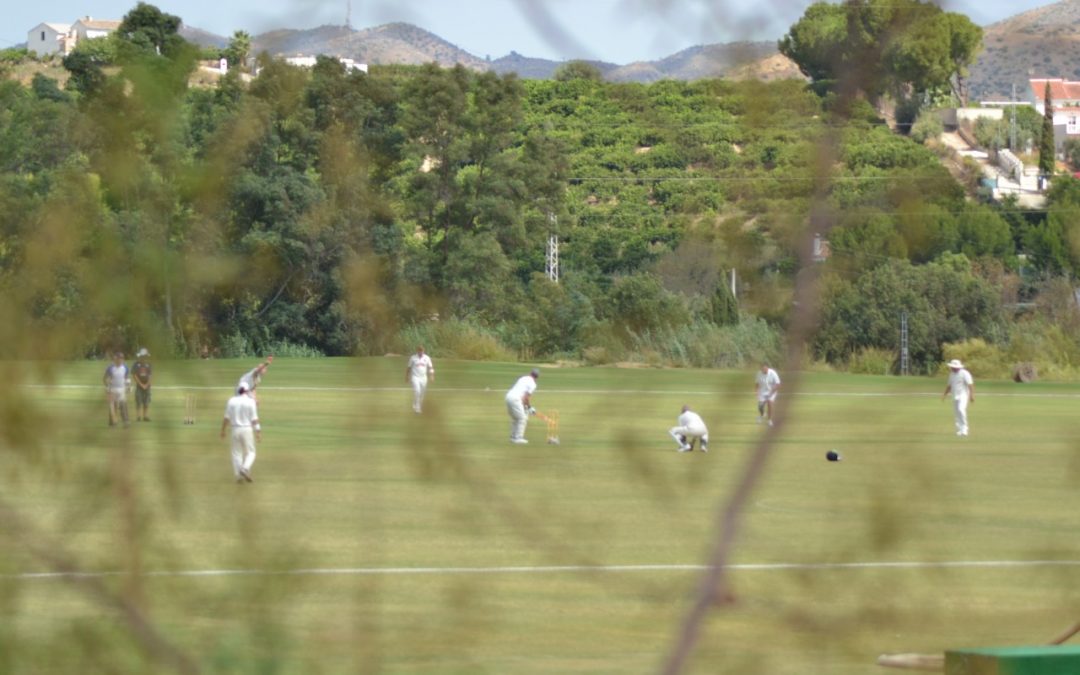 There’s nothing better to see than cricket fever running high; especially over the festive season. Despite being far from a white Christmas on the Costa del Sol, many of the CDSCC faithful donned their whites to take part in at least one of the festive fixtures. Whether to shift the mince pies over Christmas or simply to take advantage of the very mild weather of late, the Cartama Oval has been buzzing of late, with players of all ages putting their hat in the ring to take part. And this Sunday’s friendly fixture between the Crusaders and the Vikings was no exception. On a perfect day for cricket, 23 players effectively spanning three generations took to the field to dispute a 40-over-a-side tussle that would kick off 2020 in style.

And kick off in style it did. In just the second over of the innings, Vikings’ young seamer Alex Young got one to dart back in to Jeremy Standley, whose defence was beaten by what wicketkeeper Phil Flaxman described as a “banana ball” as soon as it clattered into the stumps. Fellow opener Diego fared slightly better, clubbing 12 runs to all parts of the oval before likewise succumbing to Alex’s razor-sharp seam bowling.
With the scoreboarding reading 20-2 after four overs, the batting team were in desperate need of a partnership – a pair to steady the ship and get some runs on the board or an outstanding knock from someone in the middle order.
Enter captain Nasir Dar. Positive from ball one and eager to rotate the strike wherever possible, Nasir looked in fine touch and promptly went about the business of compiling runs for his team. Although two of his batting partners made good starts before falling to impressive catches – Louis Bruce was caught and bowled smartly by Nushan Alwis and David Young holed out to Simon Livett in the deep – Nasir etched a partnership of great significance with Richie in the middle overs that formed the backbone of the Crusaders innings.
Complementing each other’s styles well, Nasir scored heavily through the mid-wicket region – smoking a few sixes in that area in the process – while delectable lofted straight drives were a feature of Richie’s innings. The former scored 99 before selflessly retiring, while Richie, with 71 runs to his name, followed suit with a couple of overs to spare to make way for some younger blood.
At the end of the allotted 40 overs, Crusaders posted a highly competitive 308 for the loss of 5 wickets; meaning the Vikings were staring down the barrel of a run chase of more than seven an over to win.

Knowing they had an important job to do, openers Phil Flaxman and Simon Livett strode out to the crease to get the Vikings reply underway. After riding an early storm in the shape of junior opening bowlers Jaime Riley and Max Purdy – both batsmen head edges put down behind the stumps off the former’s bowling – the pair enjoyed an opening stand of almost 70 after just over 10 overs. Vikings were up to speed with the run rate and looking resilient.
However, and as is often the case in this sport, a bowling change was to do the trick for the fielding team. Simon gave his wicket away, chasing Niall Garrett’s first ball and picking out Louis Bruce at point with lamentable accuracy; while new batsman Jeremy “the cat” Knott dispatched a Richard Lake delivery to the boundary before the latter toppled Jeremy’s castle and sent him back to the shed shortly after.
Opener Phil would not be deterred and continued to accumulate runs at a fine rate of knots, joined as he was by Nushan alwis at the other end. Nushan’s intent was clear, as he batted outside his crease and decided early on he wouldn’t get dictated to by the disciplined bowling. The Vikings cause was dealt another blow the ball before the mid-innings drinks break as Phil was adjudged to have not grounded his bat and run out for a well-made 43 by Louis, who was having a blinder in the field.
Spirited resistance was shown by Nushan and Gavin Flaxman, but Nushan’s departure for 24 shortly after the drinks interval signalled that the game was just starting to slip away from the chasing side ever so slightly. Into the fold walked skipper Jay Wild – a man more than capable of turning this game on its head – and the Vikings contingent sensed that it was now or never for their team.
Despite chalking up four boundaries, Jay was to perish on 20, caught by the standout fielder Louis trying to work away a delivery from Marcus lake yet another junior with a bright cricketing future ahead of him. Valiant efforts of Viking stature from Mark Garrett and James Riley late on in the piece painted a rosier picture for the team batting second, as their 25 and 23 not out respectively (in double-quick time, it must be noted) took their side’s innings total to 242 for the loss of 9 wickets.
Crusaders 308-5 (Nasir Dar 99* (ret.), Richie (surname?) 71* (ret.), Alex Young 2-33, Jeremy Knott 1-27) Beat Vikings 242-9 (Phil Flaxman 43, Mark Garrett 25, Richard L 2-22, Jaime (surname?) 2-51) by 66 runs.

Inspired batting displays from Crusaders Nasir and Richie, as well as Phil from the Vikings eleven, will doubtless seem like Man of the Man performances on first glance. And they would be, but for the liveliest of livewires in the field, Louis Bruce who clung on to 3 catches, effected one run-out, took one wicket and scored 16 important runs for his team. A huge all-round performance and thoroughly deserved MoM after 80 overs and a long and riveting day of cricket in the January sunshine.
Speaking of which, special thanks must go to Ian “Iggy” Higgins for umpiring the entirety of the match and controlling the over rate with a meticulousness akin to that of a schoolmaster. Thanks must also go to Dave Cooper for preparing a fantastic pitch, as well as all the parents and players who make these enjoyable fixtures possible.